Make sure the $10 million benefits the people who live here

Thank you to everyone who got involved and advocated for a better city. Public engagement changed the outcome. There are some great projects! (And some projects I’m less sure about.) Let’s keep it up and ensure all the projects are as successful as possible.

On August 1, 2017, Governor Cuomo announced that Hudson, NY was going to get a $10,000,000 grant for the Downtown Revitalization Initiative (DRI). The announcement was met with high praise as well as grave concern. Would this money fund projects that would vastly improve the lives of our residents? Will it mostly benefit wealthier residents, future residents who will move to Hudson, and tourists? Will it make it more difficult for lower-income residents to remain in Hudson?

It’s six months since the announcement. The DRI Local Planning Committee (LPC) has officially met nine times. Three of these meetings were geared for public input. We are days away from the March 1 final meeting of the LPC where they will give their final comments on the DRI funding. At this point, it’s not clear what role the LPC has in shaping the funded projects and ultimately who will benefit from the funding.

We were repeatedly told that the community input is going to drive the process, but I don’t think LPC members or residents of the identified neighborhood have had a chance to meaningfully shape the outcome.

What Conversations and Voices Shape the Outcome?

However, it’s not clear how public input shaped the application’s projects. Moreover, the application process could have been more transparent. For example, on July 12 Gossips of Rivertown reports, “The DRI application, which was the subject of several meetings during its conceptualization, was submitted on June 14. Since then, neither the public nor the Common Council has seen the final application.”

It’s unclear how much the projects described in the application will shape the final award allocation. There is a public input process, but again it’s not clear how much the public can shape the outcome. When the funding was announced, it was difficult to determine if people could add new projects and if affordable housing projects would be eligible.

On October 19, the 23 person LPC was convened. According to the DRI website, “The LPC will be particularly responsible for ensuring that the priorities and interests of the community are reflected in the planning process and the resulting recommendations.” However, LPC members were not empowered to actually shape the planning process. It’s not clear how much impact their views will have on the final funding decisions, or if they simply serve to create the appearance of public input.

As a committee the LPC was not offered nearly enough time at the public meetings to have a lively discussion. Instead we were just moved along and spoon fed decisions that had already been made well in advance.

At the first public meeting on October 26, the public ranked the project proposals. The common thread was “affordability.” Affordable housing, affordable restaurants, and a grocery store were top picks as well as projects for transportation, workforce development, and walkability.

The application notes a similar sentiment:

…Hudson is a city that cares about inclusivity, social justice, and community building. In the public comment sessions we held to prepare for this grant application, among the needs and desires put forward repeatedly were job training to lift people out of poverty; decent, affordable housing; and a grocery store. And these were concepts that virtually every demographic in the audiences got behind. No matter what age, gender, or ethnicity—everyone needs groceries, a job to pay for them, and a decent place to lay their heads.

Will the public’s vision coincide with the DRI funded projects?

Affordability is vital because many of our residents are struggling with poverty, underemployment, and rising housing costs. As the application states:

According to comparative data from American Community Survey, 23% of households [in Hudson] live in poverty, with a median income of $35K. Twenty seven percent of households receive food assistance, and 43% of households pay more than 30% of their household income for housing—a standard calculation of economic strain.

While the significance of poverty seems to be a factor in getting the grant, it’s not clear if the majority of funded projects will effectively address the needs.

We know trickle-down economics doesn’t work. But there is a risk that the DRI grant falls into a similar trap. It could fund projects that propose to generically help the economy and then assume that economic growth at the upper income brackets will benefit those at the lower levels. Are there more effective ways for the grant to benefit the people who need it most?

Who Benefits from New Jobs?

The application lists several interesting projects that have a job creation component. I’m curious to know more about how the grant will create jobs and how we can ensure that people who live in Hudson benefit. For example The River House, Phase 2 project includes $250,000 for the creation of 114 full-time positions. That’s a significant amount of jobs. How do these jobs compare to the proposed 7 new full-time positions at Digifab or the 10 jobs at the to-be-determined business of the Robert Taylor House? Do we consider a company’s employment track record? Are we anticipating that people who live in Hudson will be the ones hired? Is there a plan to recruit and train unemployed and underemployed people into these new positions? Are these positions describing short-term residencies of visiting artists and filmmakers? How many long-term, full-time jobs for working people from Hudson will be provided?

One possible scenario would be that we bring in people from outside of the area for these positions. Perhaps the new hires get a place in the downtown area. This could increase real estate and rental prices and cause even more stress to low income residents.

We need more jobs, but not all new jobs affect the city equally. I wonder how the DRI will prioritize.

Who Benefits from Public Infrastructure?

The application has several exciting infrastructure projects. Building sidewalks and improving public parks will provide important services to the neighborhood—one that benefits everyone who lives and visits the area.

The application states that proximity to the once highly-polluted river, made the downtown area less desirable. It was the place where lower income people were able to live and, as the DRI application states, the “ugly bits of municipal life” were sent to the area. Not all public infrastructure projects will benefit everyone the same, but in a general sense the area could really benefit from public investment.

However, one possible outcome is that we improve the downtown area, the area becomes more desirable, and then lower-income residents are forced to move elsewhere. As we improve the downtown, we must create systems to ensure that people who live in the district are able to stay in the neighborhood and benefit from the DRI. 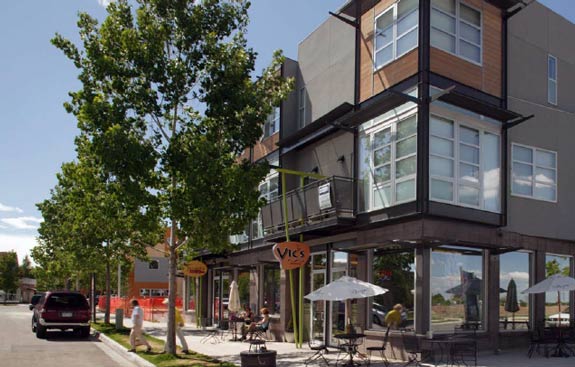 What’s in the Box?

The Kaz development site is a great idea, but all of those decisions are being made behind closed doors, and without any work in tandem with the DRI, or maybe there is a select few involved?

There are at least two projects that propose to improve out-of-use buildings, the Dunn Warehouse and the former KAZ warehouse site. The DRI request for these two proposals is $3,000,000, over 30% of the remaining funds to be allocated. These buildings need major investments in order to make them functional. But what they will function as has not been determined. The application gives some ideas of how these buildings could be used, and many options revolve around a public/private partnership that will generate revenue for a private developer. Without more concrete details, it is difficult to determine who will ultimately benefit.

Though we spent several months in the fall drafting thoughtful goals and strategies to guide us, there was no time and no mechanism in place to help seek or support projects that might actually fulfill the goals/strategies that we had laboriously worded.

In addition to the project proposals in the application, additional projects were submitted. However, there are significant barriers to go from a favored idea to a funded project. It wasn’t until the December 7 public meeting that the Stantec facilitators spelled out the project proposal requirements and circulated the application. The requirements include market analysis, consultations with architects, and significant matching funds in hand. The proposals were due January 3. This scheduling required a very tight turnaround for any project not already in motion, especially for ones not already in the DRI application.

The process could have been significantly better. The requirements and application should have been distributed on day one. I’m unclear on the goals of the public process of August through December. That could have been valuable time to gather the community to help get new ideas off the ground and improve existing proposals. There could have been a series of workshops to help prospective applicants put together a proposal and to meet with focus groups.

The February public meeting had even less dialogue than the previous ones. It had no dialogue or conversation from the public. It was a brief presentation followed by a simple four question survey.

The public process is costing us $300,000 out of the grant money and I think we should have gotten more value out of it.

Learning from this process, I see the need for shovel ready ideas. I’d like to see the Hudson Development Corporation develop more project proposals around affordability so that they are in the queue for the next opportunity.

We’ve missed our chance for a collaborative community process where ideas are generated and executed. But we still have time to affect the final outcome.

Write the LPC and tell them which projects you think will really benefit residents of Hudson. Let them know what you think of the proposed projects and how you think the money should be spent.

Dear LPC, when you give your recommendations for projects please include my views and those of the rest of the community. We have resoundingly spoken in favor of affordability, public improvements, and overall benefit to our diverse community. Please select projects that best address these concerns. In particular, I would like to draw your attention to some of my favorite projects:

These projects only make a portion of the $10,000,000 allocation and I urge you to select these as well as others that will directly benefit the community.